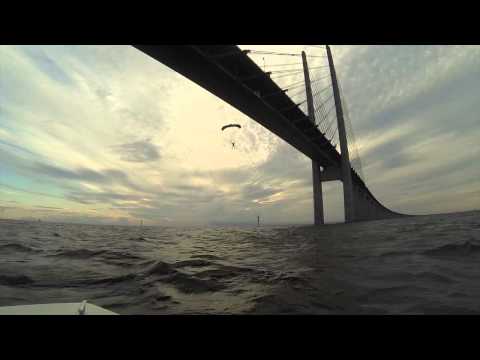 Bridge between Denmark and Sweden

We decided it was time to make a BASE jump from the Oresund bridge. It was just as fun as you would imagine, and the water wasn’t too cold. Specially not with the gear we had on.
Thanks to those involved!
Skåne Base

Öresund bridge is a double-track railway and motorway bridge across the Øresund strait between Scania (southernmost Sweden) and Denmark. The bridge runs nearly 8 kilometres (5 miles) from the Swedish coast to the artificial island of Peberholm, which lies in the middle of the strait. The crossing of the strait is completed by a 4 km (2.5-mile) underwater tunnel, called the Drogden Tunnel, from Peberholm to the Danish island of Amager. The term Øresund Bridge often includes this tunnel.

The Øresund Bridge is the longest combined road and rail bridge in Europe, and connects two major metropolitan areas: Copenhagen, the Danish capital city, and the major Swedish city of Malmö. It connects the road and rail networks of the Scandinavian Peninsula with those of Central and Western Europe. A data cable also makes the bridge the backbone of internet data transmission between central Europe and Sweden/Finland.