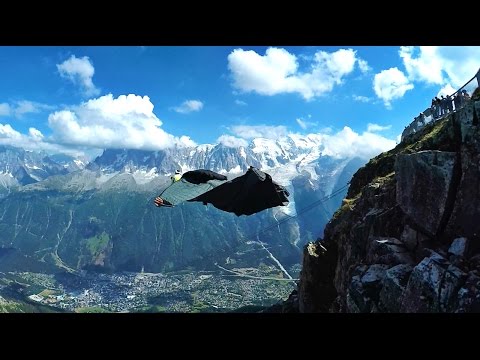 In Episode 5 Nate steps up the difficulty of his jumping before he takes on his goal of the summer, wingsuit jumping the notoriously technical, difficult and dangerous Brevent.

GroWings is a six-episode web series which follows wingsuit pilot Nathan Jones over the summer, traveling and training throughout the mountains of Europe to prepare himself to reach the goal of flying the more technical and advanced terrain of Brevent in Chamonix, France.

Ever wish you could fly?

How bout in the most beautiful place ever? Lucky boy Zak Tessier got to do it — watch this video and you’ll be right there!

‘Zak Tessier makes his first flight in a wingsuit off the top of the Aiguille du Midi. It is morning and the face is still in the shade. He lands, the radio crackles and plans are made to head back up in the afternoon to make a jump into the setting sun.

‘With no official authorization we are forced to wait until the Aiguille is closed, and climb the South face. This works out perfectly as that means that we are alone in one of the most beautiful places in the world to fly a wingsuit.’