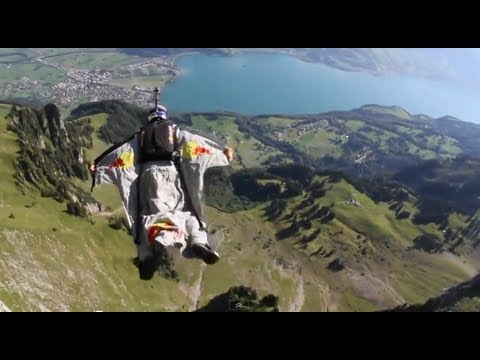 Wingsuit Gliding through the ‘Crack’ Gorge in Switzerland

Soaring at speeds of up to 160 kilometers per hour, Belgium BASE jumper Cedric Dumont has embarked on his latest conquest – taming the ‘Crack’ gorge in Switzerland’s beautiful Churfirsten mountains.
During his two minute descent Dumont is seen only meters from the rock face.

Churfirsten is a mountain range in the Canton of St. Gallen, Switzerland. They form the natural boundary between the canton’s Toggenburg and Sarganserland districts. They are the southernmost range of the Appenzell Alps, separated from the Glarus Alps by the Seez river and Lake Walen. They consist of a limestone ridge running east to west, with the individual peaks formed by erosion. The ridge is defined much more sharply to the south than to the north, with an almost vertical drop of several hundred meters towards Walenstadtberg and eventually Lake Walen at 419 m. The southern slope of the range was significantly formed by the Rhine Glacier during the Würm glaciation.