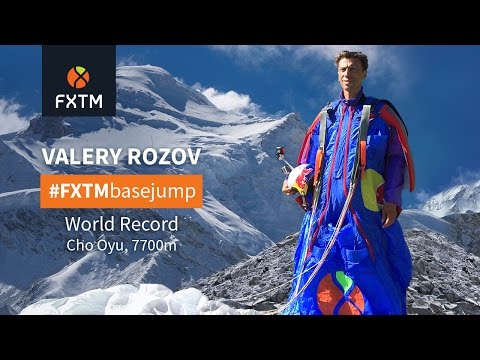 BASE Climbing & Wingsuit Flying – Red Bull From Top to Base

We look back at 2011 when Russian climber and B.A.S.E. jumper Valery Rozov broke another record. For the very first time in history, while wearing a wingsuit, he jumped from the Italian slope of Mont Blanc at over 200 km/h and landed on the Brenva Glacier after an 800-meter flight in freefall.

Valery Rozov, a well-known Russian B.A.S.E. jumper and mountaineer has conquered the highest point in Africa (5,895 meters), and made the first ever B.A.S.E. jump from Mount Kilimanjaro, from an altitude of 5,460 meters above sea level. During the jump, Rozov spent more than one minute in freefall and travelled a horizontal distance of more than 3 kilometers. The elevation change between the jump point (5,460 meters) and the point of landing (the Barranco Camp, 3,950 meters) was more than 1,500 meters.

Rozov and his team, which included four sherpas as well as photographers and camera crew, spent nearly three weeks in the Himalayas before the jump on May 5.

The ascent began on the Chinese side on the famous north route. It took Rozov four days to climb from the base camp to the jumping location, which was at an altitude of 7,220 meters.

The initial moments of the leap were the most critical phase as Rozov needed more time than usual in the freezing, thin high-altitude air to transition from freefall to flying.

But after falling for a few seconds, he flew for nearly a full minute at speeds of around 125mph along the north face before landing safely on the Rongbuk glacier – at an altitude of 5,950 meters.