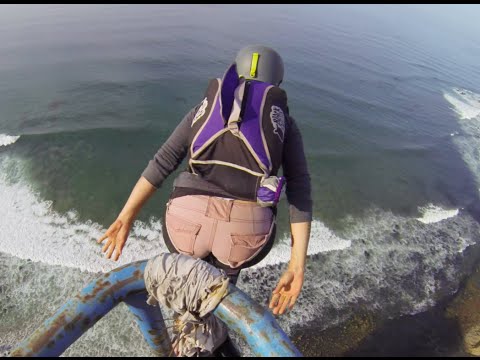 How do I like to celebrate the 4th of July? by leaving the country of course. Follow Me and my friend as we go on a BASE jumping adventure down to Mexico to jump off an incredibly deteriorated crane that was literally falling apart under our feet!

BASEgirl aka Clair Marie was born and raised in a small mountain town outside of South Lake Tahoe, California. The second eldest in a family of nine siblings she knows all about “getting your piece of the pie”. Clair, in a 2009 interview was explained as “a powerhouse in a pint sized package and mature beyond the years recorded on her drivers license”.
After 9 BASE jumps, she decided to take to the sky and completed her firs1230071_633345203366845_147781262_nt skydiving tandems, which in the normal scheme of things should have predated the BASE jumping. It wasn’t long before she became a full-time staff member at a California Dropzone packing parachutes for the tandem instructors. Acquiring the jump numbers and experience level she began filming tandem videos and loving each jump more than the last. At 19 years old, she decided to study to become an AFF instructor and earned her certification a few months later, adding the ability to teach students to her list of skills.
Clair is an incredibly accomplished BASE jumpers and one of the top female athletes in the sport! In addition she manages to balance her life as a professional BASE jumper and a successful career as a model and stunt woman, appearing in commercials, print advertisements and online media.

Best Of Bridge BASE Jumps

Best Of Bridge BASE Jumps! BASE Dreams 2 – The awesome new base jump series with Chris “Douggs” McDougall

An insane BASE jumping compilation of over 100 jumps all from Bridges in the USA! Thank you America!

El gigante – Up and Down

Aid-free bigwall acsent on Tehue root (El gigante, Mexico), jump down and a couple of other jumps all around the Mexico.

At 7,350 feet above sea level lies the ancient Tenochtitlan, better known today as Mexico City. Within the city is a world-class building, the highest in Latin America: topping out at 738 feet, Torre Mayor is considered a top-of-the-line example of modernity and functionality.

Felix Baumgartner – one of the world famous B.A.S.E. jumper known for defying gravity in places such as the Christ Statue of Rio de Janeiro, the Petronas Towers in Kuala Lumpur, the Mamet Cave in Croatia, and the Panama Channel among others – decided to jump to the emptiness from the 52nd floor of Torre Mayor and land in the heart of one of the most important avenues of Mexico City: Reforma.

Normally this wouldn’t be a major challenge for Felix, but due to the conditions that Mexico City presents for its geographical elevation, the freefall and the downward velocity become higher than in any place on Earth, causing a serious delay on the opening of Felix’s parachute.

“I feel very satisfied; it was a complicated jump because I had to manipulate my parachute a lot due to the air conditions from the buildings being around. Without any doubt it was a very different jump from those I have made before, with a big grade of difficulty.”