BASE Jumper Explains The Importance Of Accepting Death To Appreciating Life 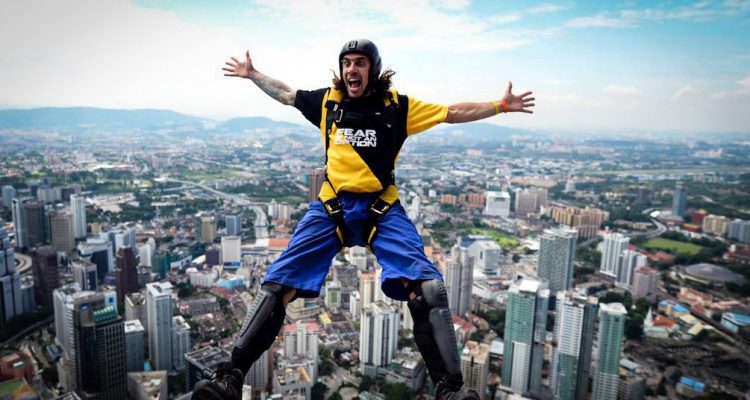 No matter how hard we try to live vicariously through their first-person footage, a GoPro simply cannot capture the feeling of participating in a sport where your primary competition is death.

To some it seems crazy to get into a sport, which has claimed so many lives. For Chris Douggs McDougall, his definition of insanity is a lifetime of boredom, comfort and caution, wasting away on the sofa and hiding from the inevitability of danger. A BASE jumper instead faces it head on, seeking comfort in the absence of regret, refusing to run from danger or succumb to fear only to arrive safe and unscathed at the doorstep of death.

For McDougall, there is a greater tragedy that lurks through the lives of the masses—a sort of death on earth—perpetual boredom of familiar surroundings.

BASE jumping was McDougall’s emancipation from this tired lifestyle. But McDougall doesn’t only BASE jump; he also surfs and is now the accomplished author of his first Novel, Confessions of an Idiot.

His BASE jumping career is seasoned with a score of adrenaline pumping accomplishments, including: first ever BASE jump in Kuwait, 1st place in the World Extreme Base Championships in Spain, world’s first nighttime human-slingshot in Dubai, and BASE jumping World Champion. 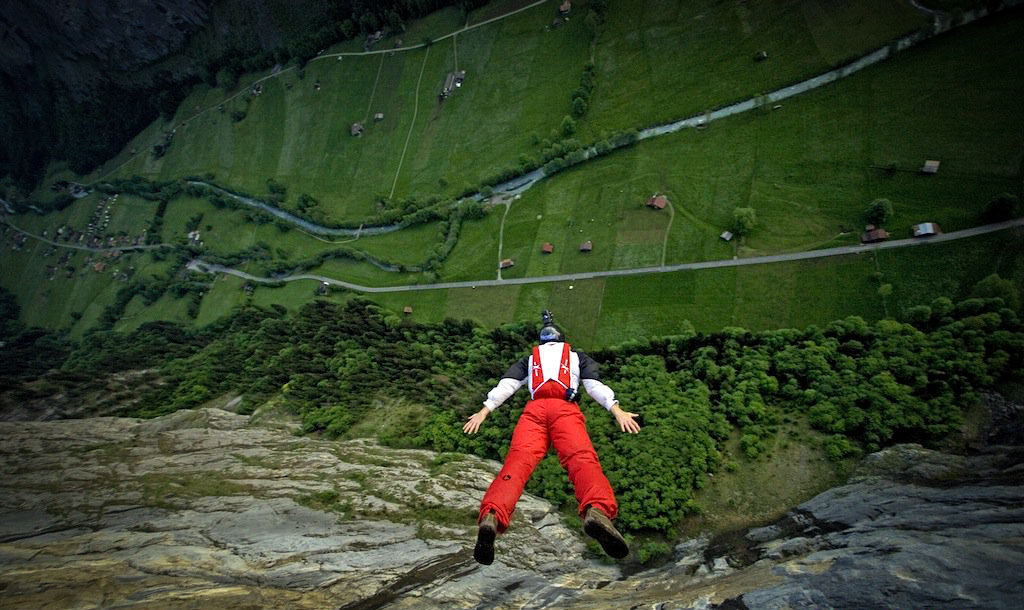 After nearly 3,000 jumps, Douggs decided to kick the danger levels up to 11 and jump from the top of an Arctic mountain. McDougall sums up the feeling of an Arctic BASE jump in one word, “survival”. Now, why would anyone in their right mind drop themselves into the heart of such perilous conditions? The answer is simple: while death is guaranteed, life is a decision. Choose well, my friends.

I recently had the opportunity to catch up with McDougall and talk a little bit about his perspective on jumping, life, death and freedom. Here’s what he had to say:

1. Does a career in BASE jumping and travel go hand in hand?
It never went hand in hand initially for me but then when I saw video from other amazing jumps from around the world it started to interest me. But then when I did start traveling I got the travel and jumping bug and I haven’t stopped traveling since.

2. How does the meditational aspect of BASE jumping compare to that of surfing?
I still think surfing is the best sport out there, but a lot of surfers are aggressive douche bags and there are limited waves. The feeling of surfing and BASE jumping are the same to me except that in BASE jumping everyone is super nice and everyone gets an equal turn at getting that feeling so the meditational aspect is actually a lot better in BASE jumping. But in saying that, if you gave me a cliff to jump from or a perfect wave with no one else out there I would take the wave every time!

3. Explain to me the feeling of jumping off a cliff in Arctic Territory.
In one word ‘survival’
There is a lot more preparation to jump off cliffs in a cold environment and you end up a little more restricted because of all the gear you need to carry but it is well worth it because the view is just simply amazing. The jumps are not so much performance jumps, but just super fun jumps where you just take everything in and enjoy the ride. 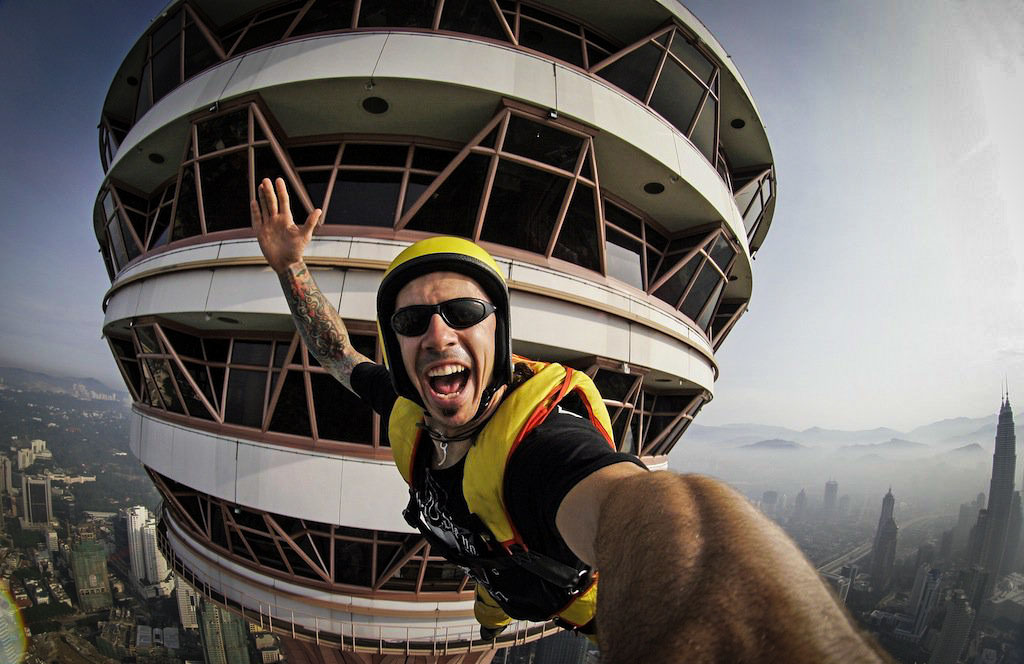 4. I feel like the wing-suit is something many people fantasize about, myself included. How do you prepare for the wing-suit? What was it like the first time you flew in a wing suit?
To prepare for the wing-suit you need to be a competent skydiver, and I feel it is good to do a lot of tracking jumps as well. Then you need to do a basic first jump course in wing-suit flying with a beginner suit. It is good to learn everything on the beginner suits first because they are much easier to control. Only then should you move into the bigger, high performance suits so you can do it relatively safely. For example, you wouldn’t go and get your driving license one day and then get in a formula one car the next. It would be suicide. Wing-suit flying is the same. Everyone wants to do it but it takes years of practice to do it safely.

5. Has BASE jumping assisted you on a spiritual level? What have you learned?
Yes, very much so, it has allowed me to connect body and mind and become closer with nature and myself. There is a lot of stripped down emotions you go through during a BASE jump but once you learn how to work with these emotions and use them to your advantage, then you can enjoy the spiritual side of it a lot more.

6. When and how did you overcome the fear of death?
I haven’t overcome the fear of death and I never will. I have learnt to accept death and that is the key to living. Once you accept death you see everything a lot clearer and you can achieve great things. Life becomes full of positives and all experiences become productive ones. Accepting my own death was one of the best things I ever did.

7. Is coming to terms with death an important thing to do, even if you aren’t a BASE jumper?
Yes I think it is but with the way society has brainwashed everyone, it is hard to explain that to people. As BASE jumpers, we stare death in the face every time we jump and the longer and more you jump the more chance you have of losing a friend or watching someone die, so you are forced to come to terms with it if you want to continue in the sport.

8. When and why did you decide you didn’t want to live the conventional 9-5?
As soon as I got a full time job (as a carpenter) I wanted to get out of the 9-5 world, but I didn’t know how. Skydiving showed me that anything was possible if you want it bad enough and although it was one of the scariest things I have ever done, quitting my job for the first time and venturing into the unknown was one of the best decisions I have ever made in my life! 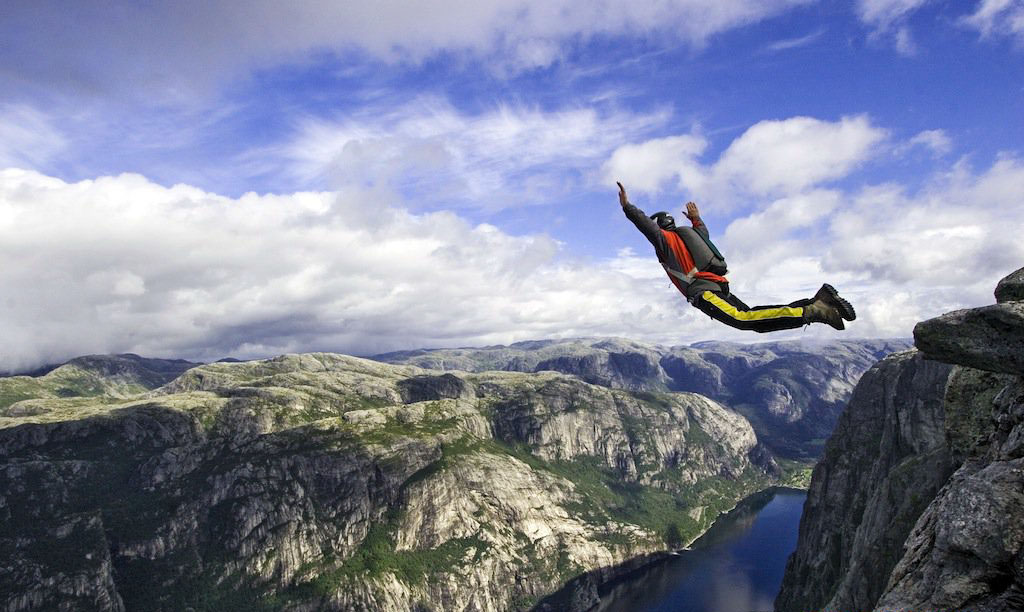 9. How long did it take you to turn BASE jumping into a sustainable career?
I haven’t been able to do that completely yet. It is very tough. In the last two years I have definitely been able to earn money from BASE jumping, but not enough to get in front and save money. I still work a normal bar job in the winter and that has been what allows me to live with more freedom to work in BASE jumping in the summer. I hope one day to get a manager and be able to make more money from BASE jumping, but the reality is that BASE jumping has only been sustainable for a handful of jumpers around the world in the last few years. I am still hoping that I will be one of them some day!